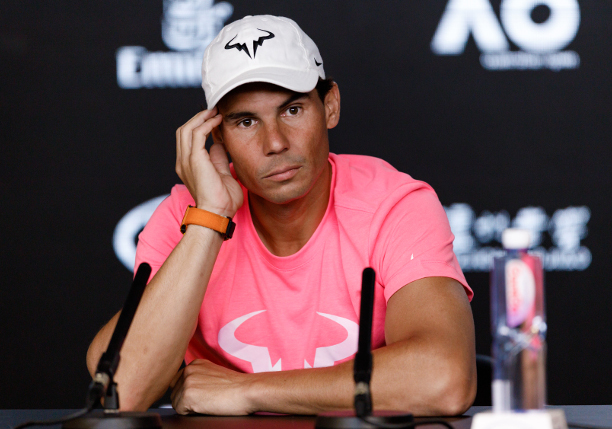 Rafael Nadal suggests stars other than Novak Djokovic have reached out to Tennis Australia on behalf of pros confined to hard quarantine in Melbourne.

The world No. 2 says the difference is they don’t always publicize their efforts.

In an interview with ESPN Argentina conducted from the Adelaide bubble Nadal seemed to refer to Djokovic, who contacted Tennis Australia on behalf of the 72 players in hard quarantine.

“Some need to make public everything they do to help others,” Nadal told ESPN. “Others do it in a more private way without having to publish or advertise everything we’re doing.

“The calls we make to help the most disadvantaged players, some of us don’t need to want to advertise on it.”

Eight-time AO champion Djokovic, who is quarantining in the Adelaide bubble with fellow superstars, published an Open Letter last week in response to criticism he received after speaking out in behalf of those players in Melbourne quarantine.

“My good intentions for my fellow competitors in Melbourne have been misconstrued as being selfish, difficult and ungrateful,” Djokovic said in a statement. “This couldn’t be farther from the truth.

“I genuinely care about my fellow players and I also understand very well how the world is run and who gets bigger and better and why…Not every act is taken at its face value and at times when I see the aftermath of things, I do tend to ask myself if I should just sit back and enjoy my benefits instead of paying attention to other people’s struggles.”

The 20-time Grand Slam champion’s come after Argentinean veteran Guido Pella publicly called out Nadal and Dominic Thiem for staying quiet while they train in the more forgiving Adelaide bubble along with Djokovic, Naomi Osaka, Serena Williams and Simona Halep. The stars are scheduled to play in A Day at the Drive charity exhibition on Friday in Adelaide.

“I am very surprised with Rafael Nadal and Dominic Thiem’s silence,” Pella told the

3igales podcast. “They are in Adelaide, and us in Melbourne, regarding what is happening here, I wouldn’t put my life on the line for anyone, but Djokovic, at least, shows intentions. Later, I don’t know what happens.

“It’s not that it hurt me, because nobody has to say anything, but how much Thiem and Nadal didn’t say anything about Adelaide’s quarantine, I didn’t like it. But hey, there are clearly people who think differently and, but that’s the way it is.”

In his ESPN interview, Nadal acknowledged conditions in the Adelaide bubble “have been better than most players in Melbourne.”

“Complaints are understandable and totally respectable. Where is the privilege line or not privileges if it is already a little different,” Nadal told ESPN. “And I have a different vision than other tennis players. In Adelaide, conditions have been better than most players in Melbourne. But there are players in Melbourne who have larger rooms where they can develop physical activities, others have smaller rooms and can’t have contact with their coach and their physical trainer.

“Where’s the line? It’s an ethical issue. Everyone has their own opinion and they are all respectable.”

The 2009 Australian Open champion said ultimately all players must make the best of a challenging quarantine.

“There has been talk that Adelaide people have better conditions, but I have not heard of any Melbourne player that some have much better rooms than others,” Nadal told ESPN. “I have not seen some of those who have complained so much about the conditions in Adelaide complaining about the conditions of the more than 20 untrained tennis players. Complaints always come from a disadvantaged position.

“At the time of talking about fair play or equal conditions, people don’t tend to complain about the position of those who are worse off than them. In the end we all try to get the most out of our possibilities and help each other.”

2 min read
[ad_1] West Ham pulled off a memorable Premier League great escape by winning 1-0 at Manchester United on the final day of the 2006/07 season.