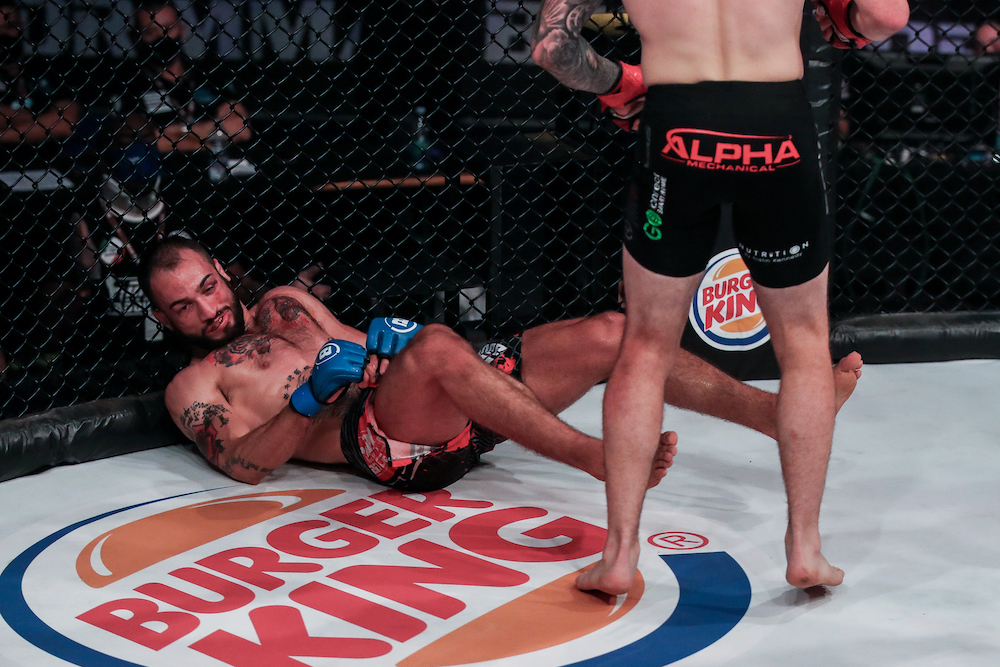 Former Bellator kickboxing champion Denise Kielholtz moved one step closer to a shot at reigning flyweight champion Ilima-Lei Macfarlane with a stunning performance as she knocked out former title challenger Kate Jackson in less than a minute in the main event of Bellator 247.

Kielholtz (6-2 MMA, 6-1 BMMA) and Jackson (11-5-1 MMA, 3-3 BMMA) were promoted to the main event spot following the cancellation of Paul Daley’s welterweight clash with Derek Anderson, and Kielholtz rose to the occasion as she produced an eye-catching performance behind closed doors at the Allianz Cloud in Milan, Italy.

After a short feeling-out process, Kielholz landed a strong right hand, then connected with a huge left hook to the temple that sent Jackson stumbling to the canvas. As the English fighter attempted to recover her equilibrium, Kielholtz swarmed her opponent and unloaded a vicious barrage of ground strikes to force referee Dan Miragliotta to dive in and wave off the bout after just 43 seconds.

It extended Kielholtz’s winning streak to four, with all four victories coming inside the distance, and could position her for a potential shot at reigning champion Macfarlane, who went all five rounds with Jackson last December at Bellator 236.

A huge first-round stoppage win for @Denisekielholtz in the #Bellator247 main event. pic.twitter.com/n0vCJAq5Js

After her statement victory, Kielholtz explained that she had planned for a stoppage win, but didn’t expect it to come quite as quickly as it did.

“Not this fast, but like I said, I have a plan, together with my trainer. Every time I step in this cage the plan works,” she said. “(Winning in 43 seconds) wasn’t it exactly, but that was a little bit like this, yeah!”

Kielholtz said she was proud to represent Bellator, and the promotion’s female athletes, in the main event after a late reshuffle saw them promoted to the headlining slot.

“We, as women fighters, we are the main event of this big event. I’m so blessed to stand here with all the things that are going on in the world right now,” she said. “To be the main event is like a dream. I’m still dreaming right now!”

As for her thoughts on a shot at Macfarlane’s title, Kielholtz may not have issued a direct callout of the champion, but she did make clear her desire to become a two-sport champion under the Bellator banner.

“We will see. It all depends on Bellator,” she said. “I’m just ready for anyone. I’m the kickboxing world champion in Bellator and I just want, next to my blue (Bellator kickboxing) belt, I want a red (Bellator MMA) belt.”

In the night’s co-main event bout, undefeated middleweight Norbert Novenyi Jr. extended his perfect record, but had to fight through adversity and show some persistence on the mat to earn the win against Laid Zerhouni.

Zerhouni (7-6 MMA, 0-1 BMMA) came out fast and dropped Novenyi (5-0 MMA, 4-0 BMMA) to one knee with a big left hand, but the London-based Hungarian rallied well and took the Frenchman to the mat as he leaned on his grappling skills to turn the fight in his favor.

Novenyi applied the pressure from top position as he looked to lock up an arm-triangle choke. Initially, the fence came to Zerhouni’s aid, but the London Shootfighters man manoeuvered Zerhouni into the middle of the cage before locking up a tight anaconda choke.

Zerhouni fought hard and managed to work his way free, but Novenyi kept the pressure on and, after missing with another anaconda choke attempt, locked up a triangle choke that forced the tap to score a first-round submission victory.

After his win, a disappointed Novenyi apologized to Bellator for not putting on a “massive performance,” but despite his own personal disappointment, his victory took his tally of submission wins to four, with three of them coming in the first round.

5️⃣ fights, 4️⃣ submissions@magicnorbi comes away with another impressive victory, this time defeating Laid Zerhouni with a 1st round triangle choke.#Bellator247 is live on @SkySports Mix. pic.twitter.com/ccMBFyQTgz

Ireland’s Brian Moore trusted in his hands, and they repaid his faith as he knocked out Simone D’Anna after a back-and-forth war in their featherweight matchup.

Moore (13-7 MMA, 4-3 BMMA) started well and used some sharp boxing to get the upper hand over the Italian in the opening round, but D’Anna (7-3 MMA, 0-1 BMMA) loaded up at the start of Round 2 and troubled Moore with a solid right, then hurt him with a big uppercut as the Irishman went to the canvas.

The action then ended up fought on the canvas, then in the clinch as the pair looked to win the physical battle, then they separated and swung for the fences once again.

A big uppercut from Moore snapped D’Anna’s head back and “The Pikeman” piled on the pressure before dropping him with another hard right hand to claim a big second-round knockout victory and register back-to-back wins for the first time since 2016.

After being dropped earlier in round 2️⃣, @brianmooremma composes himself to KO Simone D’Anna.#Bellator247 is live on @SkySports Mix. pic.twitter.com/0qwLjFowRG

Scotland’s undefeated lightweight Chris Duncan showcased his heavy-handed skills to claim a second-round knockout finish of Iamik Furtado, then called out Ireland’s Kiefer Crosbie for a Scotland versus Ireland clash.

Duncan (7-0 MMA, 3-0 BMMA) looked calm and composed as he happily traded hands with Furtado (6-3 MMA, 0-2 BMMA) and, after a solid opening round, “The Problem” turned up the power in the second to finish his man with heavy ground and pound to extend his perfect professional record and put himself in position to take aim at some of Bellator’s bigger names.

After his post-fight chat with Marloes Coenen, he made sure he squeezed in a callout, as he called for a fight with Furtado’s previous Bellator opponent Crosbie, who battled to a split-decision win over the Guinea-Bissau athlete in Dublin in February.

Crosbie is getting set to face England’s Charlie Leary at Bellator Europe 9 in Milan on Saturday night and, if the Irishman gets the win he wants, you can bet he’ll have a response for the Scot after the fight.

😐 Just like his nickname suggests, Chris Duncan is a PROBLEM!

Beautifully timed uppercut followed by ground and pound gets @theproblem155 the win over a game Iamik Furtado.

The New York Rangers Have WON The Draft Lottery!