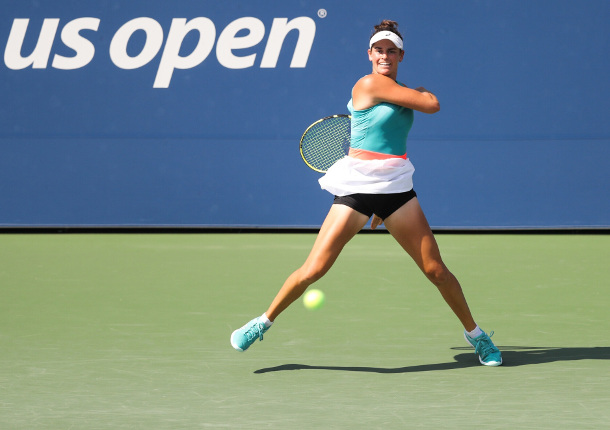 Jennifer Brady re-sculpted in the offseason. The 28th-seeded Brady is reconfiguring the draw in week one of this US Open.

Brady banged 10 aces and did not drop serve defeating former world No. 4 Caroline Garcia 6-3, 6-3 returning to the US Open fourth round for the first time since 2017.

Garcia had knocked off top-seeded Karolina Pliskova in the second round and beat Brady in their last career clash on Nottingham’s grass last summer.

These days, Brady is fitter, stronger and playing assertive tennis on her terms using her hellacious kick serve and heavy topspin forehand to roll through three rounds without surrendering a set.

Most importantly, the former UCLA Bruin is playing with the self-confidence that comes from capturing her first career title in Lexington last month.

“I think I just had a lot of matches under me. I think, you know, just going into every match, believing that I can win,” Brady said after beating Garcia for the fourth time in seven meetings. “And I think also one of the big things is, you know, I have been serving really well and then able to win a lot of points off my first serve.

“I think it gives a lot of pressure to the opponent, you know, to be able to hold their service games so I’m able to break, as well. Yeah, I think I have just been playing good tennis.”

Indeed, the 5’10” Brady has belted 19 aces in three wins, second only to Serena Williams’ 20 aces in the tournament so far.  Brady has backed her serve effectively all season: she’s holding at a 77.1 percent clip among the highest hold percentage on Tour and won 40 of 43 service games en route to the Lexington title.

The 25-year-old Brady, who typically trains beneath the bright Florida sun in the offseason, took a dramatic departure from the norm. Working with coach Michael Geserer, Julia Goerges’ former coach, Brady spent her offseason training indoors in Germany where she rented an apartment, cooked her own meals, sculpted her body in the gym and strengthened her mind.

“I told myself I want to try something new, do something different, commit to it, and I did and I’m really happy I did,” said Brady.

In Brisbane in January, Brady scored five wins on the week, including out-dueling former world No. 1 Maria Sharapova in a third-set tie break before toppling current No. 1 Ash Barty.

The mind-body connection is clear: a stronger body has given Brady more confidence and clarity on court.

Now, Brady will take on her toughest test of the tournament when she faces former No. 1 and 2016 US Open champion Angelique Kerber next.

It’s a classic clash between Brady’s aggressive serve-forehand attack and Kerber’s counter-strike brilliance. The three-time Grand Slam champion has staged five of the top eight longest rallies during week one and will try to extend Brady with a spot in the quarterfinals on the line.

“Obviously she’s a great competitor, great player,” Brady said of Kerber. “You know, different, lefty so that’s something different that against the other opponents that I have played.

“I’m expecting it to be a very tough match. I’m just going to go out there and think the same thought I have thought for every other match, just believe in myself, compete, and just play for every point.”

5 min read
[ad_1] In today’s NHL rumors rundown, there is talk the Boston Bruins might be looking to make additions and they could have their eyes on