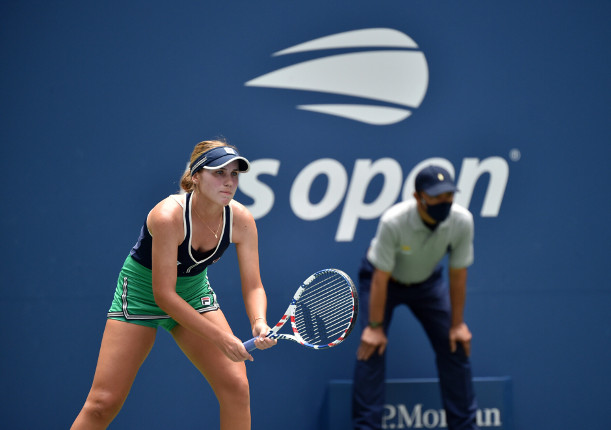 The blue Babolat bag she carries on court isn’t bearing boulders, but Sofia Kenin concedes she’s carried a competitive chip on her shoulder in recent years.

The second-seeded Kenin stretched her major winning streak to nine matches today taking down talented Canadian teenager Leylah Fernandez 6-4, 6-3 to cruise into the US Open third round for the fourth straight year.

Some players carry a chip on their shoulder, Kenin’s entire career has been built on defying doubters.

The more skeptics said she was too small to make it on the pro tour the harder it drove Kenin to disprove them. Once overlooked as an undersized counterpuncher, Kenin conquered critics with her inspired run to the Australian Open title.

“Yeah, definitely sometimes I did feel I was overlooked, I wasn’t really taken serious, different things,” Kenin said today. “I just didn’t want to focus on that. Obviously I wasn’t focused on that. I’m there to play for myself. My dad is with me by my side.”

The 5’7″ Kenin possesses the rare quality of turning adversity into adrenaline to fuel her fight.

In Melbourne, the 14th-seeded American fought off two set points in both the first and second sets stunning world No. 1 Ashleigh Barty and silencing vocal Aussie fans on Rod Laver Arena. Then she beat back two-time Grand Slam champion Garbine Muguruza in the Australian Open final becoming the shortest AO women’s champion since 5-foot-5 ¾ Justine Henin in 2004.

Victory is vindication for the woman who already owns five career titles at the age of 21.

“Obviously winning Aussie definitely really helped with my confidence, changed, like, my image drastically,” Kenin said. “After that I feel like people know me and respect me. I obviously did it for myself. Of course it’s always nice to get back at the people I guess who didn’t really believe in you or treat you fair.”

The American No. 1 who plays with a red, white and blue Babolat stick is determined to make some fireworks on home soil.

“Obviously want to do well,” Kenin said. “I’m trying really hard, trying to be focused there, do everything I can to get ready. So far it’s been going good, so hopefully we’ll keep it rolling.”

Now, things will get very interesting. Top-seeded Karolina Pliskova, ninth-seeded Johanna Konta and the 10th-seeded Muguruza failed to survive the second round, which will put more attention on Kenin.

Next up for Kenin is an intriguing third-rounder vs. the all-court skills of No. 27-seeded Ons Jabeur. Kenin beat Jabeur 6-4, 6-4 in the Australian Open quarterfinals in January.

The pair share mutual respect, but Kenin won’t be in the mood for jokes with a shot to reach her first Flushing Meadows fourth round on the line.

“She’s really nice. We both respect each other really well,” Kenin said. “Yeah, we always joke around when we see each other. I don’t think during the match there will be any jokes, it’s going to be a bit serious.”