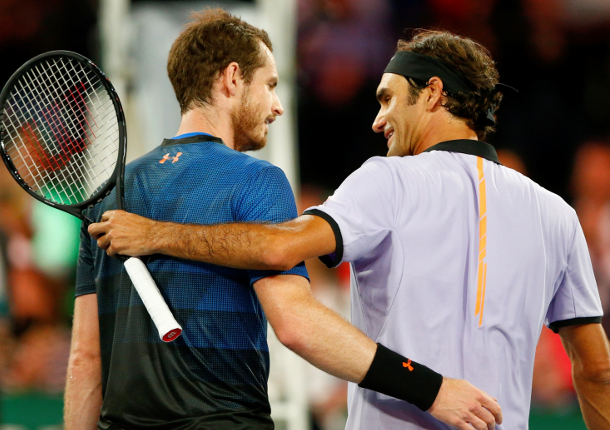 Andy Murray has played in front of rock stars and royalty.

Yet playing on grass in the GOAT’s presence was the weirdest “fan” experience the former world No. 1 ever encountered.

In the aftermath of his dramatic five-set US Open comeback conquest of Yoshihito Nishioka on Arthur Ashe Stadium, Murray was asked if he’s ever looked up at the stands and been upset at the sight of a spectator.

The three-time Grand Slam champion said seeing Roger Federer watch his 2012 Olympic opener at Wimbledon was the only time he’s felt “quite weird” playing in front of a particular fan.

“When I played in the Olympics against Wawrinka in the first round in London, Federer was sitting in his box for that match,” Murray recalled. “That was quite weird. I don’t know. It was just a bit weird looking up and seeing him sitting in the players box when usually you look up and see kind of coaches and family and whatnot. He was there in his Swiss track suit and stuff.

“I don’t know, he’s obviously one of the best players of all time, and he was, yeah, just sitting in the box. I played well in that match, so I don’t want to say he put me off.”

Perhaps the presence of Federer inspired Murray, who swept Wawrinka 6-3, 6-3 in that Olympic opener eight years ago. Murray went on to defeat Novak Djokovic in the semifinals before dimissing Federer 6-2, 6-1, 6-4 in the final to capture his first Olympic gold medal.

These days, Murray said he’s open to anyone watching his matches but concedes some the presence of some champions can pose added pressure.

“I mean, there’s not anyone I wouldn’t want to watch me, but definitely you feel certain player’s presence more than others maybe,” Murray said.