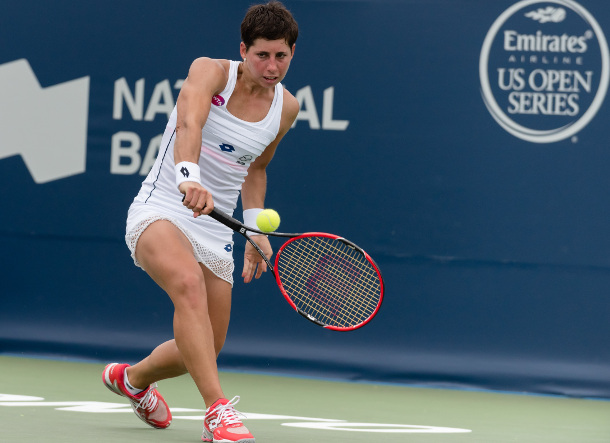 The 31-year-old Spaniard faces six months of chemotherapy after being diagnosed with Hodgkin lymphoma.

More: Muguruza Steps Into US Open Second Round

In a video statement posted to social media, a positive Suárez Navarro said she’s willing to “face whatever comes” in her cancer battle.

“I’m fine and calm at the moment willing to face whatever comes,” Suárez Navarro said. “Patience and self-belief guided me through my career. Not the easiest rival to deal with. I’ll need my truly best.”

Patience and self-belief guided me through my career. Not the easiest rival to deal with. I’ll need my truly best. pic.twitter.com/lF9oVChWRh

The gut-wrenching news prompted an outpouring of love, prayers and support for the popular Suárez Navarro.


Carla. I’m so shocked and sad to read this news. I’m thinking of you and know that a strong and special person like you can get through this. Big kisses, Simo 🤗


I am sad to hear this . But you were always fighter. Stay strong. Sending all my strength your way.


All the very best Carla! 🙏


Thinking of you and sending you all the positive energy and thoughts. ♥️


With you with all my heart Carla ✊🏼❤


Dear Carla, you’ve always been a fighter & you will fight through this. Wishing you all the strength needed to win this though battle 🙏🏻 The Tennis world is with you ❤️


Hi Carla , want to wish you nothing but strength and courage to take on this battle . Thinking of you and sending lots of positive energy. ❤️Kim

Last December, the former world No. 6 announced her intention to retire after the 2020 season. Suárez Navarro said recurring injuries and her desire to spend more time with her family and less time traveling the global circuit were key components in her retirement decision.

“2020 will be my last year as a professional tennis player,” Suárez Navarro said at a press conference in Spain. “Tennis has given me so much more than I could imagine when I started playing with twelve years. “I am beginning to have other priorities and tennis is a very demanding sport that requires many sacrifices. This last year will be just as intense and demanding.

“The objectives are clear and both my team and I are committed to make it as professional as possible.”

The baseliner from the Canary Islands is a three-time Australian Open quarterfinalist and a two-time quarterfinalist at both Roland Garros and the US Open. The 5’4″ Spaniard has won three doubles titles—all partnering Garbine Muguruza—and advanced to six doubles finals, including the 2015 WTA Finals.