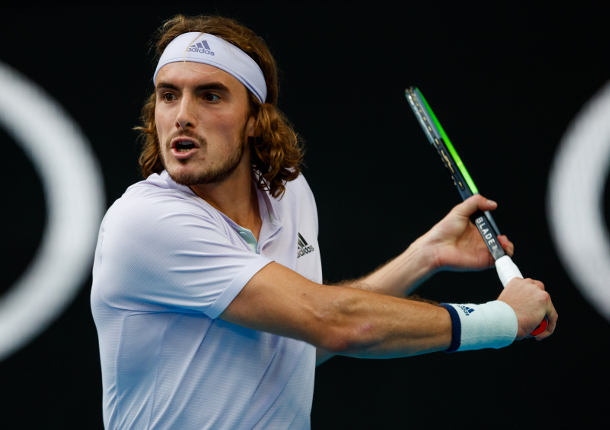 Life in the US Open bubble has reignited a love affair for Stefanos Tsitsipas.

The sixth-ranked Greek says he’s fallen in love with his craft training behind closed doors for the Western & Southern Open and US Open.

The tournaments are staged in succession without fans at the Billie Jean King National Tennis Center in an effort to reduce the risk of a Coronavirus outbreak.

Tsitsipas said training on the NTC grounds without the typical festive crowds has created quieter conditions—and helped him fall in love with the practice process.

“It is difficult at first,” Tsitsipas said. “You’re not able to go anywhere except your hotel room. You keep going back and forth from your hotel room and on the site. I think it’s difficult not to be able to mix it up a little bit, go somewhere else, go to a nice restaurant with your team, go explore the city a little bit. That daily routine, that daily repetition makes it difficult.

“At the same time it’s for the safety of everyone. I don’t feel like it’s unfair to me because everyone has to undergo all of this. So that gives me in a way a different approach towards my tennis, that gives me an opportunity to focus more on my tennis and less of what’s happening outside of it, which is great. I practice a lot. Gives me an opportunity to practice a lot, discover myself more being out on the court, love my sport even more, appreciate my sport more.”

The fourth-seeded Tsitsipas has a first-round bye and will play either 2017 US Open finalist Kevin Anderson or Kyle Edmund in his Western & Southern Open opener.

Tsitsipas, who won his fifth career title in Marseille in February then reached the Dubai final bowing to Novak Djokovic, believes the fan-free Flushing Meadows major will see a lot of surprises.

“What’s good about the new US Open is it is going to be in the record books. It has never happened before, I assume,” Tsitsipas said. “You are part of history I guess. That’s what makes it different. We are just used to every single year have spectators, being surrounded by people. This year, as I said, it is very different.

“What I find very interesting is, like, I want to see who is going to manage that better than anyone else. It is going to be an interesting US Open, I tell you that. Again, it’s something different. I think we’re going to see quite a few surprises this year.”