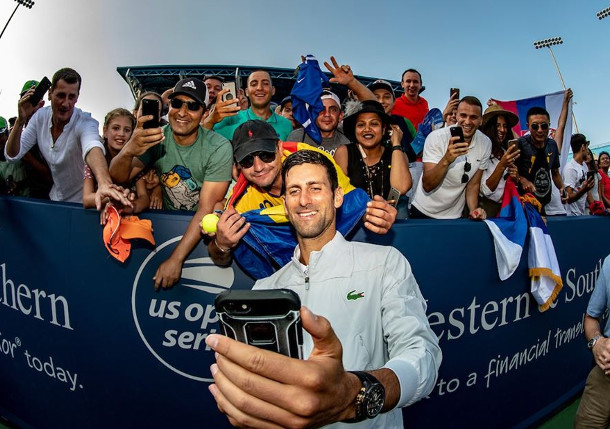 Novak Djokovic launches his quest for a fourth US Open title this month—and concedes he came close to opting out of New York.

In an interview with The New York Times’ Christopher Clarey, Djokovic, who says he’s fully recovered after contracting the Coronavirus on his Adria Tour, reveals he committed to Flushing Meadows only after receiving assurance he would not be expected to quarantine when he returns to Europe after the Open.

The US Open, which will be staged August 31st-September 13th, will be played without fans and players ensconced in a “safety bubble” in an effort to reduce the risk of a Coronavirus outbreak.

“I was very close to not coming,” Djokovic told The New York Times. “There were a lot of uncertainties. And there still are, yeah, a lot of things that are not really clear.

“I want to play. I mean that’s why I’m here. I am personally not afraid of being in a risky, dangerous health situation for myself. If I felt that way, I most likely would not be here. I am cautious of course, and I have to be responsible and of course respect the regulations and rules and restrictions as anybody else. But things are unpredictable. Anything can happen in the tennis court or off the tennis court.”

The eight-time Australian Open champion carries a perfect 18-0 record into this week’s Western & Southern Open, which the USTA moved from Cincinnati to the Billie Jean King National Tennis Center in Queens as a prelude to the US Open.

Djokovic plans to play both singles and doubles in the Western & Southern Open draw with Serbian countryman and buddy Filip Krajinovic. Djokovic won both his doubles matches partnering Viktor Troicki leading Serbia to the inaugural ATP Cup in Australia in January.

Neither Federer, who is out for the rest of the year after undergoing a second arthroscopic surgery on his knee, nor Nadal, who opted out of New York to prepare for defense of his Roland Garros crown, are in the US Open field. Djokovic said “of course” his desire to break Federer’s major mark and surpass the Swiss’ record of 310 weeks as world No. 1 were factors in his decision to play the US Open.

“One of the reasons why I keep on playing professional tennis on this level is because I want to reach more heights in the tennis world,” said Djokovic, who is staying in a private home with coach Goran Ivanisevic and another player outside of New York. In recent years, Djokovic has stayed in a private home in New Jersey that has its own hard court.

In the wide-ranging interview, Djokovic also called criticism from media and fellow players, including Nick Kyrgios, of his Adria Tour “a witch hunt.”

The man who has spent 282 weeks as world No. 1 disputed claims he is opposed to vaccines though he expressed concern about a potential Coronavirus vaccine.

“I see that the international media has taken that out of context a little bit, saying that I am completely against vaccines of any kind,” Djokovic said. “My issue here with vaccines is if someone is forcing me to put something in my body. That I don’t want. For me that’s unacceptable.

“I am not against vaccination of any kind, because who am I to speak about vaccines when there are people that have been in the field of medicine and saving lives around the world? I’m sure that there are vaccines that have little side effects that have helped people and helped stop the spread of some infections around the world….

“How are we expecting that [vaccine] to solve our problem when this coronavirus is mutating regularly from what I understand?”

Dodgers: Mookie Betts Thought He Would Spend His Entire Career in Boston

2 min read
[ad_1] The Dodgers getting Mookie Betts might have been the best thing to happen to Los Angeles in a long time. All season long, he’s