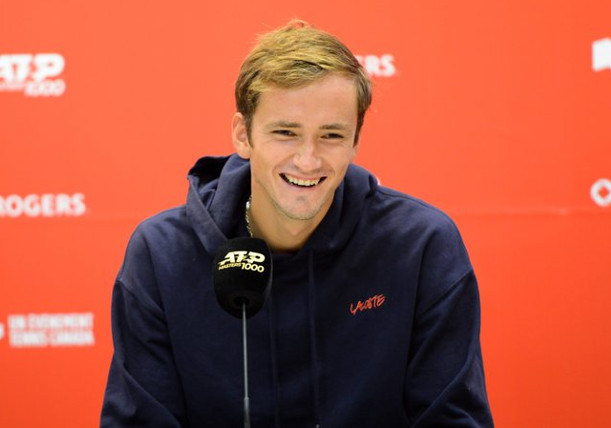 A year ago, Medvedev pushed Nadal to five sets in a pulsating four hour, 49-minute US Open for the ages.

“Of course there can be opportunities,” Medvedev told L’Equipe’s Franck Ramella in an interview. “There’s a chance of a new Grand Slam winner. There are only three left in the table, with Djokovic, Murray and Cilic…

“But I’m going to take it game by game, I can’t imagine lifting the trophy yet. I don’t know what to expect. It’s never happened that more than 100 players haven’t played a single competitive match for five months! There will surely be incredible results…

“As for Novak (Djokovic), he is a great champion. There’s been a lot of things that may have bothered him lately. But when he’s on the court, it’s a different story. Many of us think that negative things make him stronger.”

The Big 3 of Djokovic, Nadal and Federer have combined to capture 13 consecutive Grand Slam crowns.

World No. 1 Djokovic, who won his eighth Australian Open title in February, is a strong favorite to win the US Open.

In his maiden major final in New York last September, Medvedev played with toughness, tenacity and intelligence roaring back from two sets down and earning three break points in Nadal’s first service game of the final set before bowing in five sets.

The fifth-ranked Russian told L’Equipe it will be strange playing on the game’s biggest Grand Slam stage without fans, but is ready for action.

“It’s going to be sad without the crowd,” Medvedev said. “Given what happened, I was hoping they would be for me… But in junior, futures or even Challenger, I’ve played in empty stadiums before. It’s going to be weird, though.

“A Grand Slam semi-final behind closed doors… But hey, we know why we’re playing.”

1 min read
Auckland put on a show at Eden Park, as they come away with the BIG win over Tasman. Credit: Sky Sport NZ FOLLOW US ON