Vincenzo Santopadre and Matteo Berrettini are like family, with the former coaching the latter for a decade.

During the COVID-19 pandemic, however, they had to improvise, with Santopadre and the rest of their team advising Berrettini through Zoom while the 2019 Nitto ATP Finals qualifier spent time in Florida. ATPTour.com catches up with Santopadre about that experience as well as what it will be like for him to not be in New York with his charge during the Western & Southern Open and the US Open.

Throughout the year you are always working hard with Matteo, but how did you approach a situation like this given the circumstances in the world?
In every situation we try to figure out how to be better. We know somewhere there is always an opportunity to be better, we just have to look for it. Of course like anybody else, a good tennis player has to adapt to every situation. This kind of situation of course was terrible, it was not up to us. We just had to be patient and understand that not everything could be under our control. It’s the same as a tennis match. You can do whatever you want, you can do your best, but sometimes there are some things you have to accept. Our team’s philosophy, including Matteo, is the same in that way.

We continued to work because Matteo [was able to] work to solve 100 per cent his physical problems (hernia/groin)… He had to recover from the injury and then he had a chance to be aware of things that happened last year. The past two, three years went so fast. The things he did to become Top 10 in the world, it was a lot.

This time was so perfect to stop for a while and to realise the things he accomplished, because they were really important and of course he had to be happy about this. I think this time off was a very useful time to him and to us and we had a chance to do it by call because he was passing the lockdown in the States [until the end of May] and everybody on the team was at home in Europe.

It gave us a chance and every week we were having a team meeting on Zoom and we were working a lot on tactics, working together with Craig O’Shannessy and with the rest of the team on tactics. Maybe sometimes we don’t have time to work on this aspect. Of course we work every day on tactics. But we had a chance to concentrate on this.

I think right now he is ready to play. He is excited. Everybody is excited to restart. Of course we know that the situation can’t be the same as last year, but nobody wants it because we know the situation is different. We had a meeting regarding our aim for the Western & Southern Open and the US Open. I think the most important thing is finally he can feel again the smell of a tournament, to feel the stakes, to be in competition. He’s really enthusiastic to have the pleasure of being in competition.

What was working with Matteo on Zoom like?
It’s something that we never did before. But the thing is we were lucky because everybody in the team has been working with him for a long time, especially me. We don’t need to be together physically. Of course that’s much better, but if it happens that we’re distanced, I don’t think the distance was so [bad]. This distance was mostly because of our minds, not because of thoughts. We know each other so well. Of course for everybody we had to create a new model [during this time]. It was three months he stayed in the States, but we tried to let him [enjoy his time there in Florida] a little bit.

He was practising, he had the opportunity to be for a long period with his girlfriend, WTA player Ajla Tomljanovic. We had a chance also for everybody to have time to reflect a little bit and recharge. Staying on Tour all year long is really nice, but also tiring. We recharged and me and the team, we thought that the best chance was to get the opportunity to work on tactics and we didn’t need to be physically there [to do that]. We were working on statistics. It was something that we could do by chatting [on Zoom].

Are you able to tell us at all what you were working on with his tactics?
We worked a lot on serve and return because we think that of course the game is on those strokes and especially for Matteo. We concentrated ourselves on the beginning of the game.

Will you be coming to New York with Matteo?
I’m not because I don’t feel so comfortable. I’m getting older and older, I know that. To be there you have to consider everything. If I get positive there, I’d feel too far from Europe, from my hometown, from my sisters, from my son, from my daughter and I feel that this is a special moment. I feel more comfortable, more safe here. We are lucky because we have on the team also an assistant coach, Marco Gulisano, and Ramon Punzano, who is the physio. Of course he will have Ajla Tomljanovic, his girlfriend. I was lucky to feel I could decide this without any pressure and Matteo of course understood everything. 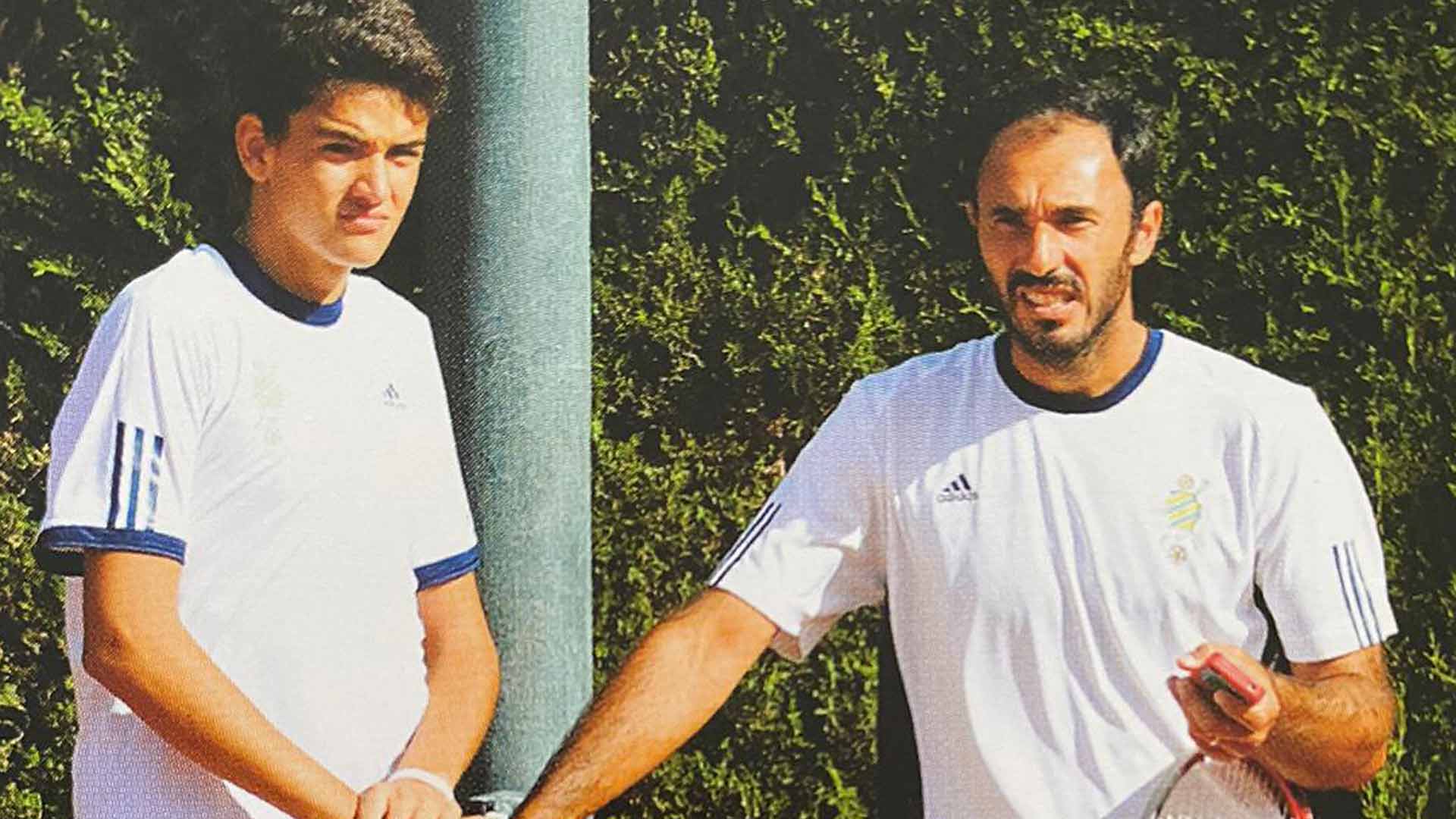 Will you still be using Zoom with Matteo while he is in New York?
Of course I will speak to him. [It’s not totally new because] once he was in St. Petersburg with Marco [without me]. I try to understand the moment and to feel if we need to talk a little bit more or a little bit less. Of course Marco is there and he can help, but of course I will speak to Matteo. Normally we have a relationship where we don’t have to [constantly] speak [to understand each other]. I for sure will speak to him or send messages trying to feel how things are, to help him, to understand how he’s feeling with his game.

Matteo likes to compete. He likes to be in tournaments. This is his first tournament since January because he just played in Melbourne. He lost in the second round and then he couldn’t play because he got injured. He wants to play again.

Even though you’ll be at home, what are you looking forward to the most? Last year, Matteo had a great tournament in New York, so are you excited to watch him compete there again?
I’m excited because we have special memories there, strong memories. Of course we know that our life is not lived remembering things, but they are special memories. I think there will be good vibes, even if I’m staying so many miles away in Rome. The distance is a lot, but I will feel like I am there.

Matteo had some great results before the US Open. But how much do you think his run to the semi-finals there changed him?
He had an unbelievable season. Of course he had some fantastic tournaments on grass, he won in Budapest, played the final in Munich, but to me in Wimbledon… after that [fourth-round] match against Federer he was able to understand that he was coming and almost ready to jump [towards the top of the game].

The US Open for me was the result that helped him and me and everybody to realise, seeing the result, seeing how he got there and how he performed, that he was a fantastic player… At the US Open, he had such a tough tournament, best of five in heavy conditions, it was hot. He was playing well. He was suffering. Since that tournament he realised that he is a very, very, very good player.

1 min read
President Trump watched No. 1 Louisiana State University and No. 3 Clemson battle it out in the College Football Playoff championship in New Orleans Monday